Setting up and organizing your sales pipeline

A well structured sales pipeline is crucial in order to keep control of your sales process and to have a 360-degrees view of your leads, opportunities and customers.

The sales pipeline is a visual representation of your sales process, from the first contact to the final sale. It refers to the process by which you generate, qualify and close leads through your sales cycle. In Melivo Dynamics CRM, leads are brought in at the left end of the sales pipeline in the Kanban view and then moved along to the right from one stage to another.

Each stage refers to a specific step in the sale cycle and specifically the sale-readiness of your potential customer. The number of stages in the sales funnel varies from one company to another. An example of a sales funnel will contain the following stages: New, Qualified, Proposition, Won.

Of course, each organization defines the sales funnel depending on their processes and workflow, so more or fewer stages may exist.

Create and organize your stages

From the Kanban view of your pipeline, you can add stages by clicking on Add new column. When a column is created, Melivo Dynamics will then automatically propose you to add another column in order to complete your process. If you want to rearrange the order of your stages, you can easily do so by dragging and dropping the column you want to move to the desired location.

You can add as many stages as you wish, even if we advise you not having more than 6 in order to keep a clear pipeline

What is a stage probability?

To better understand what are the chances of closing a deal for a given opportunity in your pipe, you have to set up a probability percentage for each of your stages. That percentage refers to the success rate of closing the deal.

For example, if your sales cycle contains the stages Territory, Qualified, Qualified Sponsor, Proposition, Negotiation, Won and Lost, then your workflow could look like this :

Within your pipeline, each stage should correspond to a defined goal with a corresponding probability. Every time you move your opportunity to the next stage, your probability of closing the sale will automatically adapt.

You should consider using probability value as 100 when the deal is closed-won and 0 for deal closed-lost.

How to set up stage probabilities?

When adding leads to your pipeline, you can add probabilities that will then automatically change according to the progress of the lead/opportunity.

To edit a stage, click on the Settings icon at the right of the desired stage then on EDIT 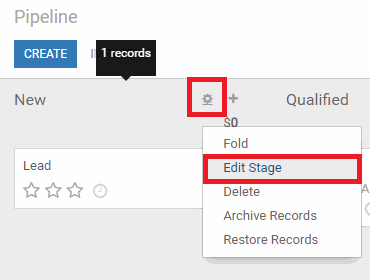 Under the requirements field you can enter the internal requirements for this stage. It will appear as a tooltip when you place your mouse over the name of a stage..